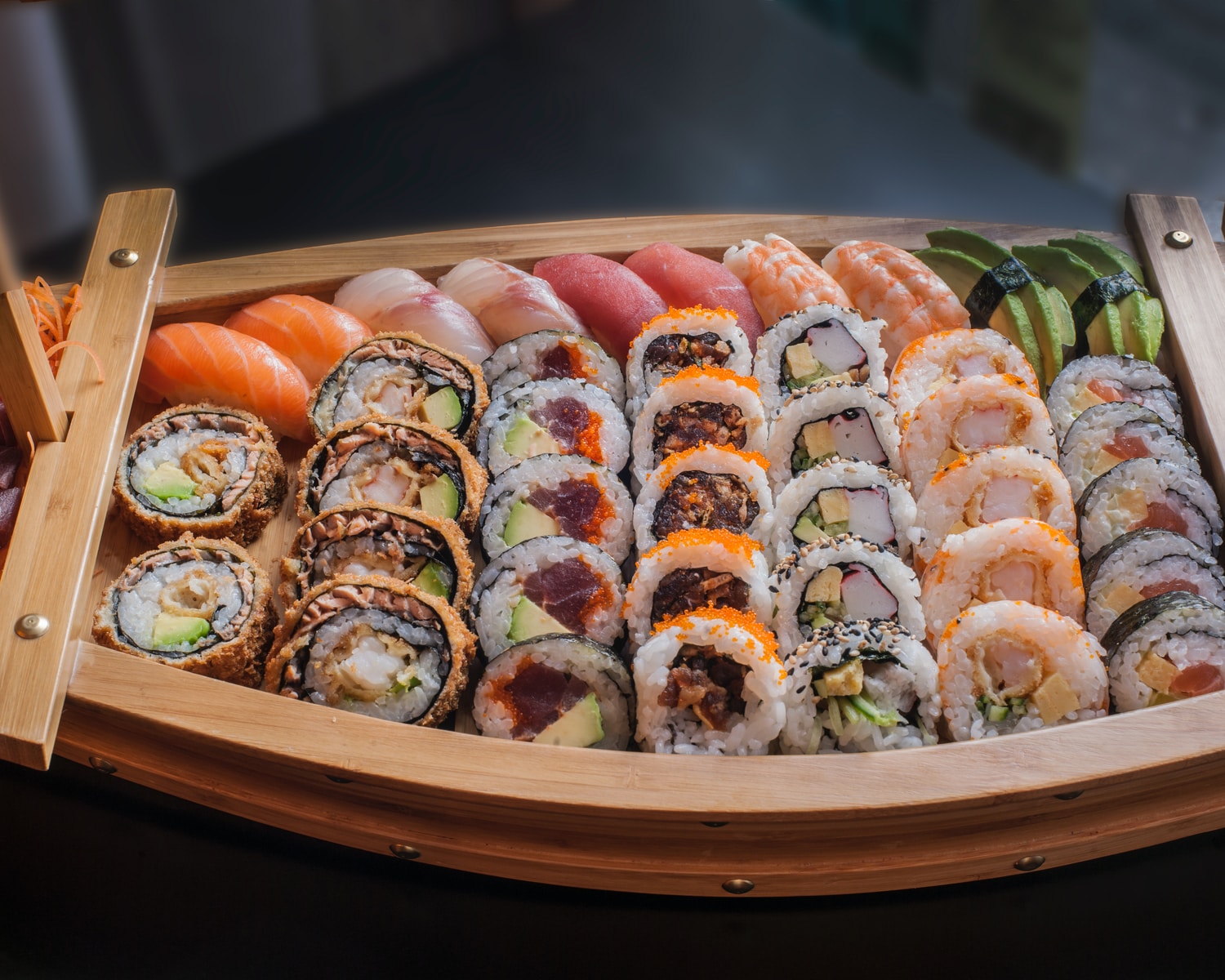 Sushi is one of my favorite go-to foods as the weather starts to get warmer. The sticky rice, salty taste and fun eating with chopsticks is a perfect way to end a hard workweek. While sushi can be a great choice if you are trying to be conscious of your diet, you definitely need to have the right info so that the wrong choices don’t make your sushi meal the equivalent of McDonald’s.

Here is the DAO guide to ordering sushi, according to my personal recommendations and research I have gathered from nutritionists.

Can sushi even be healthy?

The answer is, YES! Even though sushi does contain rice, it is quite low calorie compared to other takeout options out there, and seafood is packed with omega 3 fatty acids (healthy fat) that are great to incorporate into any healthy diet.

In order to understand this guide we have to differentiate between what we mean by “sushi” and other common orders from Japanese restaurants. Here is a very brief primer on the difference between sushi, sashimi, maki and nigiri.

Any pairing of ingredients with vinegared rice and served in bite-size pieces is considered sushi. Contrary to popular belief, sushi has nothing to do with fish at all. Instead, the word “sushi” describes the specific preparation of the rice used in sushi-making. Sushi rice is a specific variety of short-grain rice prepared with rice wine vinegar. The vinegared rice has its own unique flavor and clumps together to enable the creation of sushi rolls and other preparations. Sushi is often made with fish and other types of seafood. It is also sometimes made with egg or vegetables like cucumber and avocado.

There are two types of sushi: nigiri and maki. They differ primarily in the way they are prepared and presented. Nigiri is a bite-size rectangular mound of rice topped with a piece of sashimi. There may be a small amount of wasabi between the fish and rice to hold the two together, or a thin strip of toasted seaweed might be used to tie them. The word “nigiri” means “two fingers,” which describes the size of the rice.

Sashimi, loosely translated, means “pierced body,” and it refers to a delicacy of thinly sliced fish or other types of meat. Sashimi is eaten plain without accompaniments aside from soy sauce. This is to allow the flavor of the meat to shine.

Sushi itelf is not inherentl unhealthy. As is in most cases, it is the lack of portion control that can turn a simple sushi outing into a 4 digit calorie meal. The goal is to walk away no longer feeling hungry, and you can help yourself do that before you even touch a piece of rice. Here’s some key elements to make a part of your order and to nosh on before you actually get the big sushi tray or bento box:

Green tea is made so excellently in Japanese restaurants and it also helps digest the food AND burn fat. It is also a natural appetite suppressant, so if you order it as soon as you sit down you likely will not eat as much. This is a great article about sake and how it relates to your health.

Sashimi is full of healthy protein and without the added white rice. Although I do genuinely like sashimi, I also to order at least one roll on the slide to get the satisfaction of the rice, seaweed, and sushi. The protein in the sashimi will help you feel more full if you eat it before the sushi roll. Best kinds of sashimi to order: tuna, salmon, and yellowtail. Each piece of sashimi has about 35 calories, so if you were eat 5 pieces, that would be about 170 calories.

Miso soup usually comes complimentary with sushi orders anyway, but it is a great way to fill your stomach with warm liquid so you eat less. The warm liquid and tofu from the soup and the fiber from the seaweed salad will help fill you up, especially if you have them as apetizers. A cup of miso soup is mostly broth and some kelp and tofu, and only has a measly 60-70 calories per serving. Seaweed salad as long as it does not have any kind of dressing has only about 30 calories per cup.

You can entirely replace eating sushi with sashimi if you want to, but I do not want to miss out on the seaweed and the rice, so I order sashimi as a side order for a roll of sushi rather than ordering several rolls of sushi.

The healthiest sushi rolls are:

Cucumber, veggue or avocado rolls: If you are a high-volume eater, like once you pop you just can’t stop with those chopsticks, I would recommend ordering one or two of these rolls because they are extremly low in calories and so you can eat more of them.

Rainbow rolls: Rainbow rolls are great because they have a lot of fish on the outside as well so the protein will make you fuller faster. Although the calorie count per roll is around 475, it is due to the high amount of protein, so usually one roll is only necessary per order.

Plain tuna, yellowtail or salmon roll with avocado: all of these fish are a source of health protein, fat and omega-3s

California roll: Even though this may be made in some case with imitation crab it is still

Rolls with brown rice: Some places offer this or even cauliflower rice, so if that is an option, take it! But this does not give you license to eat more , just remember that brown rice actually has MORE calories than white rice but also more fiber to keep you full.

Sushi rolls to limit/steer clear of:

Any “spicy” kind of roll, i.e., spicy tuna or salmon: The spiciness of this roll is usually attributable to some type of spicy mayo sauce squirted all over the rice. Besides the fact that the Japansese nver contemplated mayo when they brough sushi to our culture, this adds a lot of unnecessary “condiment caloriebomb” calories per bite. If you want your sushi roll to be spice, that’s why we have wasabi. So just order the plain tuna or salmon roll or the one with avocado/cucumber is also a good choice

Philadelphia roll: Besides robbing you of the protein to smush cream cheese next to the salmon, save the cream cheese for the bagel.

Eel roll: This roll often comes in some type of sugary sauce and is even advertised as “BBQ eel” adding unnecessary calories.

Shrimp Tempura roll: This should be obvi but deep fried anything with white rice is generally not a great idea if you are watching your weight.

Tips about sake and soy sauce

So these two “s” liquids are very popular with a night out having sushi, but can definitely derail an otherwise healthy meal.

Sake is a traditional Japanese rice wine that has been made since ancient times. Traditionally, it is served warm, but now restaurants offer Sake martinis to be in vogue. One shot of sake, or 1 fluid ounce, contains 39 calories, 1.5 grams of carbs, 0.15 grams of protein, and 0 grams of fat. When we drink alcohol, that is put in priority ahead of all the macronutrients, including carbs and fat, in the energy we have to burn. So if the meal you are eating already includes a high amount of carbs and fat, that’s just one more big hurdle for you body to have to overocme. And we all know that the warm feeling of sake in your stomach can definitely whet your appetitie, so it is very important to plan ahead when it comes to this.

A better choice would be to have green tea with your sushi as suggested above. If you do want to have a little sake, considering having 1-2 servings and then switching to green tea, and then factor this into your overall meal plan, for example, order one of the lower calorie rolls.

Now let’s talk about the other “s” – soy sauce.

Don’t dunk your sushi in soy sauce like Shaq

This is actually a sin of eating sushi in Japanese restaurants. You are only supposed to lightly touch your sushi into the sauce, fish side up if you are having nigiri. And you are not supposed to mix the wasabi with the soy to create a green goo. Besides the etiquette point, soy sauce can definitely be a condimment caloriebomb. A tablespoon of soy sauce only has about 10 calories, but over 900 milligrams of sodium. The recommended dietary allowance (RDA) of sodim per day is 2300 mg so you could be charging a lot of caloires and wake up the next morning feeling like a blowfish.

If you ordered too much – can you eat sushi the next day?

Sometimes our eyes are bigger than our stomachs, especially if there’s a larger party of people. Or you orderd it at home and feel full. Can you stick it in the fridge and eat it as a snack the next day? Generally the consensus is that if the sushi has raw fish, it is okay to take home some leftovers and store them in a refrigerator up to 24 hours. If it’s a roll with cooked materail like crab or vegetables you can leave it longer.