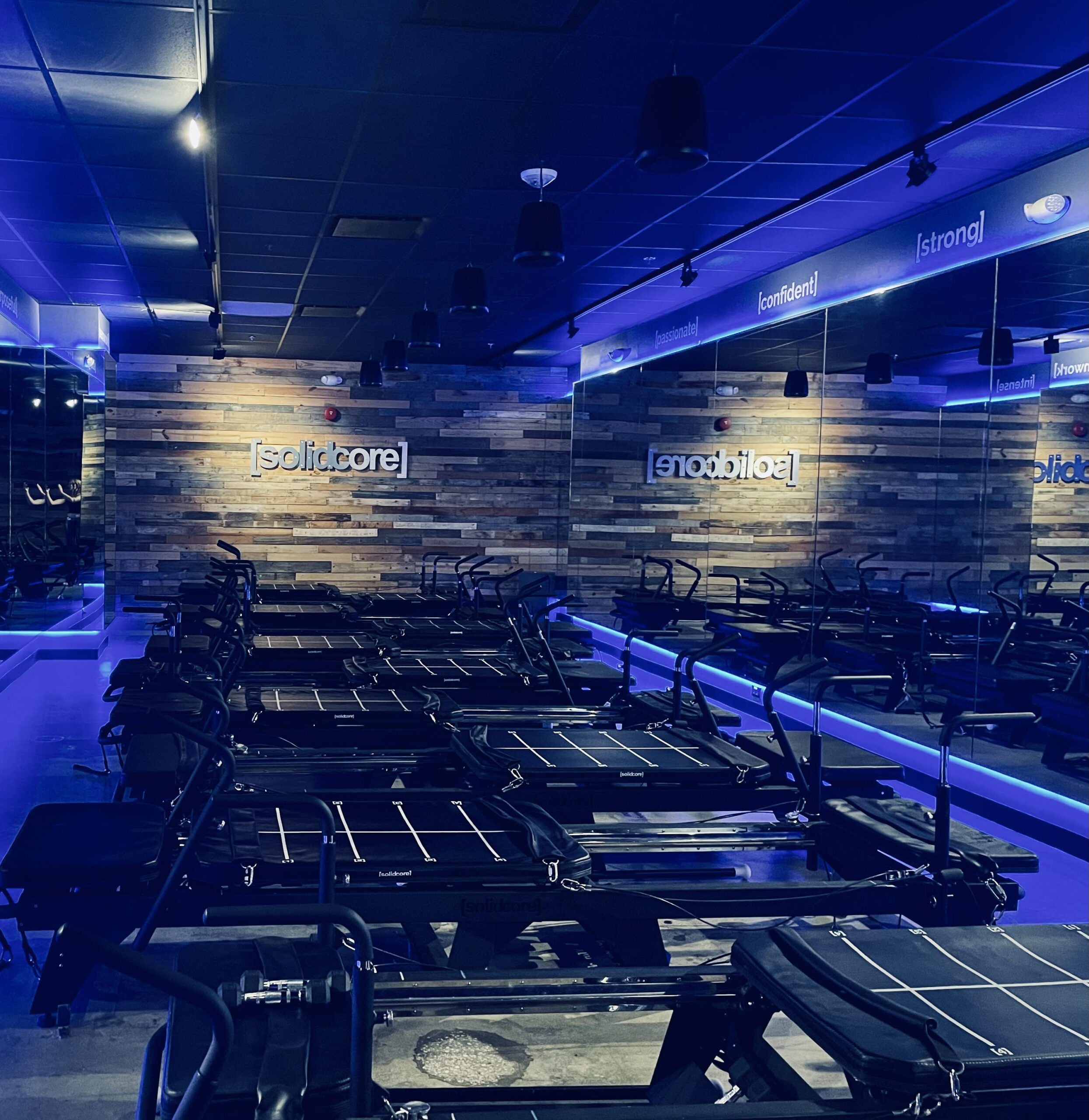 The [solidcore] studio in the West End, Washington DC.

Commonly referred to as “Pilates on Steroids,” [solidcore] is a cult favorite you may only hear of through word of mouth. This post explains [solidcore] – what to expect, how to get the best out of class, and why it’s become a must try workout.

What is [solidcore]? [and why is it bracketed?]

Locations : Several in DC and the DMV area, where it originated in 2013; the studio rapidly expanded and can now be found in 71 studios across the country in major cities and suburbs, mostly on the east cost and mid and southwest, including Chicago, Minneapolis, Philly, Dallas, Miami, and many more. According to Loren, the studio director who also taught the class I attended on June 7th in the West End studio, there are plans to expand out to the West Coast.

Level of difficulty: [solid] 9. This is not an “every day” workout. Even the company itself doesn’t recommend doing this workout more than twice a week, because your body gets so torn down it needs the recovery. The difficulty isn’t just physical, though – it’s psychological. You put your body in a lot of super awkward and unfamiliar positions and you kind of have to trust that you know your limits but still can push them. It’s definitely tricky and takes a few times to get comfortable. Especially when you first realize it’s not what you understand “Pilates” to be. And that comes REAL quick!

The history: You have to know a little bit about the roots and the founder to really get the workout. [solidcore] was founded by Anne Mahlum in 2013 in DC., and would grow at a rapid pace to rival the SoulCycles and Barry’s of the boutique studio circuit. At first, its reputation spread by whispers – you gotta try solidcore, someone would tell me standing in line at Sweetgreens. I went to the original Adams Morgan studio and more recently the West End studio in DC (one of 9 DC studios). The [brackets], I am told, are meant to symbolize a tightness of community and core. She recently named a new CEO but will remain active in the strategic direction of the business as the company’s Executive Chairperson. You can read more about the history of how [solidcore] became an entrepreneurial Cinderella story here. and listen to a recent podcast feaaturing Anne here.

Online options: If there is no studio in your area or you still prefer to workout at home for now, also classes available on the Equinox plus app (which you can download even if you are not with Equinox). If you try that option, make sure you have a pair of sliders if you will try that. I’ve done a few but it definitely cannot replace the studio experience – it doesn’t translate the way Peloton does for indoor cycling. Nor does it seem that is a goal of the enterprise. This is an in person expereince, which could give you a perfect reason to escape the confines of kids, dogs, and zoom calls!

If you want to find out more about the Equinox+app, you can read my summary here).

When you first walk in, it is very blue and deceptively benign. You see the row of machines, and you’re like, cool, I get to chill on this machine the whole time. Machine means no jumping or burpees, yes! You will be begging for burpees soon enough. Tip: make sure you save the code to get into the studio somewhere. You usually get that in an email and have to let yourself in with a keypad outside.

The classes are designed to be small. Pre-COVID, classes are generall more than about 10-15 people, but you can go to and pay less for the “off peak” classes, which has even less people (I really like this part of the model). The megaformers form a neat line sandwiched between two mirrors, and then you see a big wall with a [solidcore] logo in the back (like in the captioned picture).

The class is taught by one coach and if you are new it usually means a detailed walk through and demo by the coach before the class. If you are new, get there about 10 minutes early (but not earlier, as there is usually a class wrapping up right before). Every coach I have seen has been quick to greet you, very animated, and very focused on you and pushing you. Sometimes your name gets called out (nice adjustment Kate! Or way to get on those toes during plank Mark!). You don’t really see the coach much because most of the class you are either facing the mirror, wall, or looking down into the “sweatlana”. Do not call it a megaformer – it is not one! It’s [solidcore]’s own made machine (if you want background on that, read this article in the Washingtonian).

The coach cues the moves and transitions, but your best bet is to identify the person in the class who’s a regular and follow the leader. Some key things to know:

Here’s a visual of what you will be dealing with:

Vocab you need to know

There are a few key vocab/positioning words you need to know besides sweatlana:

You need to know these terms because the transitions are fast. In fact they start even before you are done with the previous move. The coach will tell you what you are doing next by saying “In 10 seconds you are going to do X” so it’s a mind challenge to balance focusing on the movement at the moment versus mentally preparing for the transition. So already knowing the terms above and exactly where you need to go is key to not being on the wrong side (and not everyone faces the same direction).

OK, so what will you actually be DOING? While there is an overall structure, there is variety so that it would be virtually impossible to do the exact same workout twice. I will outline the format of the last class I went to as an example, but that’s not exactly how every class will be.

The class starts with the part that hurts the most, the plank series. You usually are doing a long series of plankwork in forearm plank, and then in high plank, where you basically are slowly moving the mobile part of the carriage while staying rock solid on your arms on the other side. About midway through the first push you start to think, “Oh, this is hard.” Then when you realize you have about 5 more minutes of plank work, you think “Dear God, what have I gotten myself into? Heeelllllp!” The good thing is, even though the movements are slow, you are not in one set of work for long. The movements may be slow but because of the intensity you aren’t in them for long.

Then, you then transition to lower body where you are usually standing upright on the carriage doing some kind fo lunge work, and/or at the end with a foot on the floor doing split squats. There is also usually inner and outer thigh work, kneeling or standing, which looks like this:

After legs, just when you thought you were done with core, you hit the obliques with some side/twisted plan. Yeouch. Oh, I forgot. There are usually “army crawls” in between. (here’s what those look like on “dry land”)

After core/ oblique work, you usually transition into arms. By the time you get to arms you should be stoked because that means class is in the hone stretch in most of the full body formats. Coaches are definitely good about telling you when you have “single digiits” left. Then you start to feel that relief and think, I can push more.

There are some pulleys under the carriage that may have been used earlier for core and you are doing a variety of bicep curls, front and side raises, rows, and tricep kickbacks. Some arm work like push-ups and tricep presses can be thrown in. Each movement is usually at three paces -singles, pulses and holds.

Also, expect to be standing upright on the carriage where your core is key to keeping you from falling. If this makes you super nervous, luckily there is a long bar that your coach can give you to keep your balance. For a good section you are basically doing this:

Varies by location, but there are special deals for express classes, new clients, and classes taught by coaches in training. Both memberships and class packs are available, and you can also “drop in.” It is also available via classpass.

You can’t really get the [solidcore] experience at home. And they are not trying to do that. I think that trying something challenging is a great way to transition back to in-person fitness.

I don’t thnik any other workout focuses on working on the deep core muscles the way this workout does. Abs/core is usually an afterthought to most fitness classes. The good thing about [solidcore], pandemic or not, is that you truly have your own space. There’s no navigating not running into anyone or even having to look at anyone else, except of course for the “high fives” which are back now.

Because [solidcore] is not designed to be your only workout, pairing it with cardio and resistance training is a great way to get results. I personally like to do [solidcore] a f

For me, going back was intimidating because I hadn’t been in so long. I felt so much weaker in my core, but having this workout help me identify what I need to work on and some personal encouragement is really helpful.

The DAO of Fitness on Vacations